A sound wave first encounters the outer ear, sending a vibration to the middle ear, where it is amplified and transmitted to the inner ear (Butler, 1992). As shown in Figure 1.4, neural encoding of sound commences when basilar membrane vibrations activate hair cells in the auditory nerve. Action potentials that travel along the auditory nerve are processed by subcortical nuclei that comprise the peripheral auditory pathways. A frequency map, or tonotopic organisation, exists from the early level of the basilar membrane to the peripheral auditory pathways (Zatorre, 1998b).

The peripheral auditory pathways terminate at the level of the primary auditory cortex (refer to Figure 1.5). Complex pitch perception is attributed to the primary cortex (Griffiths, Penhune, & Peretz, 2000). Unlike sinusoidal sound, which contains only one frequency, complex pitch is composed of sets of related sinusoids. Perception of complex pitch has traditionally been explained in terms of spectral analysis, where the frequency components of a sound produce activity in different places along the cochlea in accordance with their frequencies. However, pitch perception can also arise from the time structure, or temporal information, in a noise stimulus even though there is no energy peak at the corresponding frequency. A simple place-coding model cannot account for the perception of pitch from such stimuli (Zatorre, 1998a). Thus, a temporal model of pitch perception has been developed, equating perceived pitch with time intervals in neural activity patterns (Griffiths et al., 1998). Fine temporal structure at the level of milliseconds or tens of milliseconds is relevant to complex perception of individual musical notes and the vowels of speech. 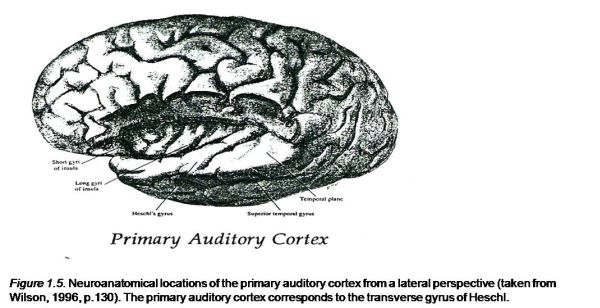 Temporal and Spectral Processing of Pitch for Individual Tones

The timbre of individual tones includes the influence of temporal and spectral characteristics (Saldanha & Corso, 1964; Samson, 2003; Samson & Zatorre, 1994). Timbre is a subtle quality that gives a sound its dullness or brightness. It explains how instruments, such as the piano and flute, can be discriminated, even when they are playing a single note of equal duration at the same pitch and volume. Spectral content (i.e. the number and amplitude of frequency components) and temporal profile (i.e. the onset of a tone) are considered the most determinant of instrumental identification (Paquette & Peretz, 1997).

Griffiths has made the distinction between fine temporal structure for individual notes and higher-order structure for patterns of sounds (Griffiths, 2002). The accurate perception of complex pitch patterns relies on higher-order temporal processing at the level of hundreds of milliseconds or seconds (Griffiths, Dean, Woods, Rees, & Green, 2001). Higher-order temporal processing is relevant to music or certain speech sounds, such as some consonant-vowel transitions. Deficits involving complex pitch patterns are associated with secondary association cortex lesions (Zatorre, 1998b).

Externally produced musical sensations that perseverate after the initial stimulus has ended, occurring in the absence of epilepsy or psychosis, are known as musical illusions (Berrios, 1990; Keshavan & David, 1992; Terao & Matsunaga, 1999). Griffiths has proposed that musical illusions rely on intact high-level processing of segmented pitch patterns (Griffiths, 2000). Based on the common index event of acquired deafness in musical hallucinosis patients, he attributes musical illusions to progressive hearing loss. He has proposed a model for musical illusions based on the phenomenology of patients who experienced continuous or near-continuous paroxysmal illusions involving the perception of recognisable tunes or melodies. His model is based on three auditory perceptual mechanisms that are hierarchically organised (see Figure 1.6). Acquired deafness causes impoverished input to spontaneously trigger a module responsible for the perception and imagery of patterned sound (perception/imagery module). Interaction between the perception/imagery module and the recognition system gives access to sound patterns encoded during previous listening experience (see Figure 1.6, bottom). Griffiths asserts that the right superior temporal gyrus (STG) of the secondary association cortex is a sufficient substrate for musical illusions (Griffiths, 2000).