Two groups of participants were studied. The control group consisted of five people (2 male, 3 females) with a mean age of 73.2 years (S.D = 7.91). The experimental group (early DAT) consisted of five individuals (3 males, 2 females) with a mean age of 78.6 (S.D =7.47), who presented to the Department of Neuropsychology and Memory Clinic at Austin Health, Heidelberg, Victoria between March and October, 2004. At presentation they were determined on neuropsychological examination to be suffering from MCI (mild cognitive impairment) or very early stage senile dementia of the Alzheimer's type (SDAT). There was no age difference between the patients and controls t(7) = 1.1, p>.05. Inclusion and exclusion criteria: The patient sample was selected sequentially over an eight month period. Patients were included only if the following inclusion criteria were met: no other neurological cause of a memory difficulty was suspected, including isolated lacunar infarction or periventricular ischaemia; No previous psychiatric history, including significant anxiety or depression; full scale IQ was greater than 80 and their habitual medium of communication was English. The resulting sample was accordingly small but with a low probability that the presenting memory complaint was due to a condition other than DAT.

Patient characteristics and pertinent neuropsychological findings with deviation from the normative mean are shown in Table 1. While the routine neuropsychological examination was reasonably extensive, Table 1 shows those findings critical to the diagnosis. As can be seen in , all the five patients have an estimated full scale IQ (Kaufman-Ishikuma short form- (Kaufman, 1990)) that is well within the average range. By contrast, new verbal learning abilities and confrontation naming were impaired consistent with a diagnosis of transition from MCI to early-stage CDAT (Petersen et al., 2001). Clock-Drawing was also impaired in three of the patients.

The control group was recruited by approaching the spouses of the DAT group. Subjects were excluded if they showed signs of memory loss, or suffered from a known neurological disorder. The use of spouses as a control group is a frequently utilized strategy in clinical research, and is based on the notion that spouses have shared a common socio-linguistic and socio-economic milieu (Pals et al., 2003; Verhage et al., 2003). 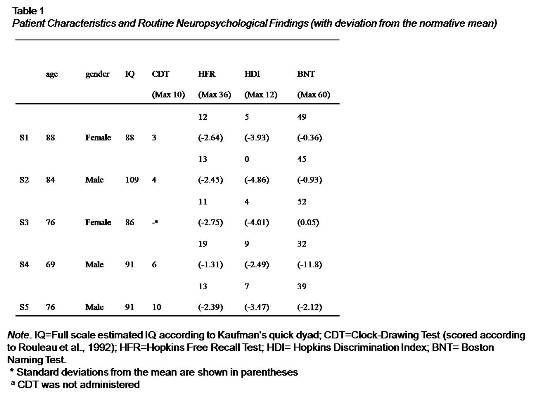