Clock-Anomalies Detection Task. Detection of anomalies by the two groups will be reported first followed by the results for the valid clocks. Invalid clocks: no differences were found between the groups in their ability to detect anomalies in clock faces t(8) = 1.03, P>.05, d = .66. As can be seen, the effect size is medium (Cohen, 1992), and this point will be explored in the discussion. While there were no group differences in overall detection of clock-anomalies, some patients provided explanations that were limited to the appearance of the clock face rather than offering an explanation on a conceptual level. Table 3 compares the type of response given by patients and controls by providing typical examples. 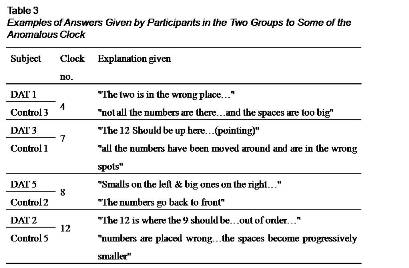