Exploratory factor analysis is utilised to identify sets of correlated items, which might ultimately be applied to construct scales. This technique uncovers latent variables called factors.

To illustrate, consider a researcher who wants to ascertain whether or not individuals with various hairstyles are more likely to engage in peculiar behaviours. Specifically, the researcher seeks individuals with mullets, comb-overs, perms, and mohawks. Individuals are asked to estimate the extent to which they undertake nine peculiar activities, on scale that ranges from 1 to 5. In particular, they are asked to estimate the extent to which they listen to Rolf Harris, discuss brands of nail clippers, enjoy statistics, store ear wax, examine gunk under toe nails, display their double jointed arms, ring people at 3.00 am, go home when it is their turn to shout drinks, and play music at maximum volume. An extract of the data is presented below. 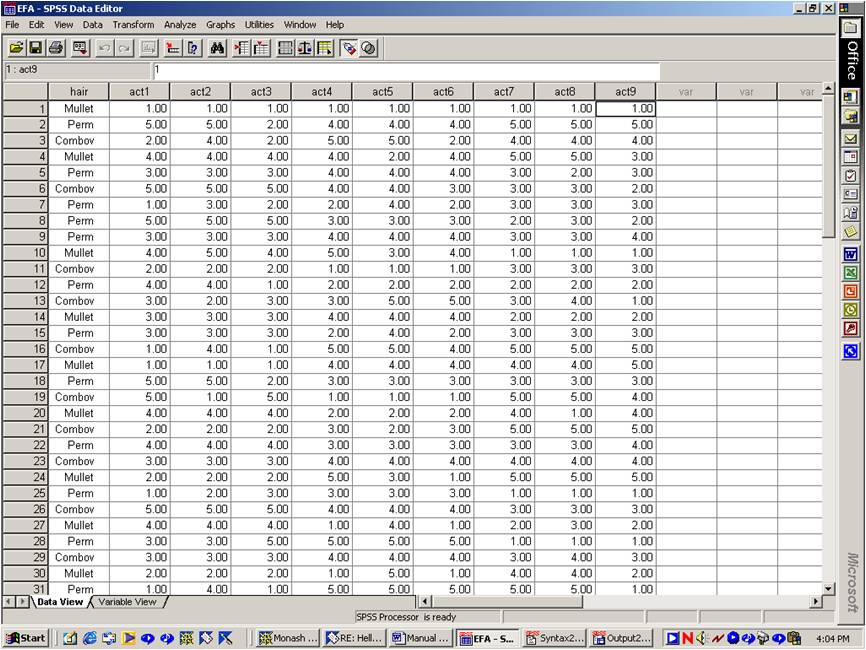 To determine whether or not hairstyle influences behaviour, a series of ANOVAs could be undertaken. Each ANOVA could pertain to a separate act or behaviour. The pattern of results that might emerge from these ANOVAs is likely to be complex, unclear, and thus difficult to interpret.

Alternatively, a MANOVA or discriminant function analysis could be undertaken to clarify interpretations. Unfortunately, this analysis is probably unsuitable here. In particular, some of the behaviours are likely to be highly correlated. For example, individuals who ring other individuals late at night also tend to play music at a high volume. The pronounced correlation between these acts creates a problem called multicolinearity, which tends to undermine the power of MANOVA and discriminant function analysis.

Clearly, to resolve these difficulties, the 9 behaviors somehow need to be integrated into a more manageable set of variables. In particular:

In other words, researchers could potentially average the first three items to generate a measure of boring behaviour. The same process could be applied to the other clusters of items. All the analyses can then be restricted to these three new columns of scores, which are presented below. 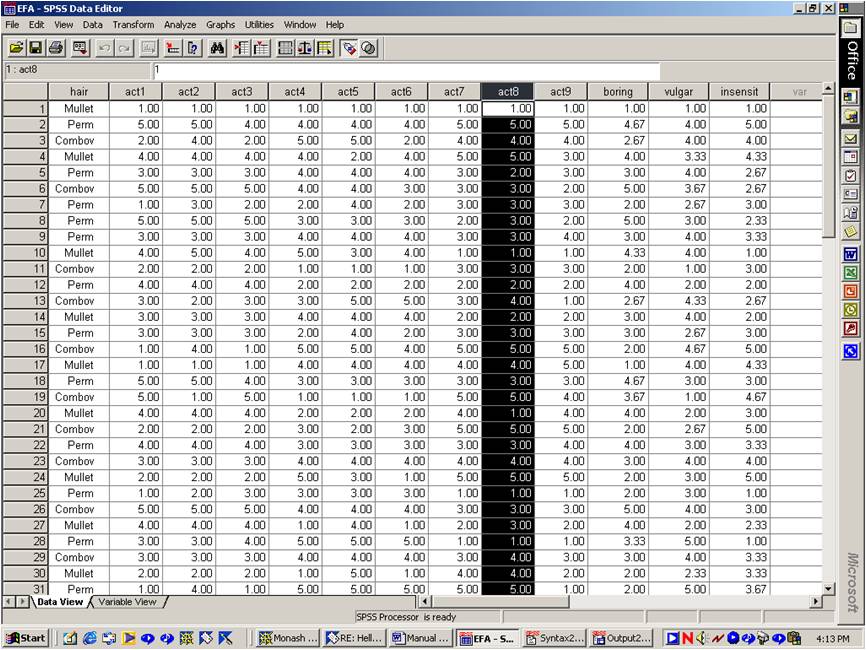 Unfortunately, the results are seldom as unambiguous and simple as these correlations. Hence, a formal, systematic procedure is needed to explore this matrix of correlations to identify factors or clusters of items that correlate with one another. Exploratory factor analysis provides this function. In a nutshell, exploratory factor analysis is utilised to uncover sets of items that correlate with one another and thus reflect a similar construct or trait.

To undertake an exploratory factor analysis:

To ascertain the ideal number of factors, consult the first set of three columns labelled "Initial eigenvalues". The subcolumn labelled "Total" presents the eigenvalues. These eigenvalues and the adjacent percentages of variance reflect the importance associated with each of the 9 factors. In essence, these indices reflect the extent to which each factors explains variance in the original responses. To illustrate this concept, suppose the researcher only utilised individuals who were equivalent on some factor. For example, the researcher might only utilise individuals who are equally vulgar. 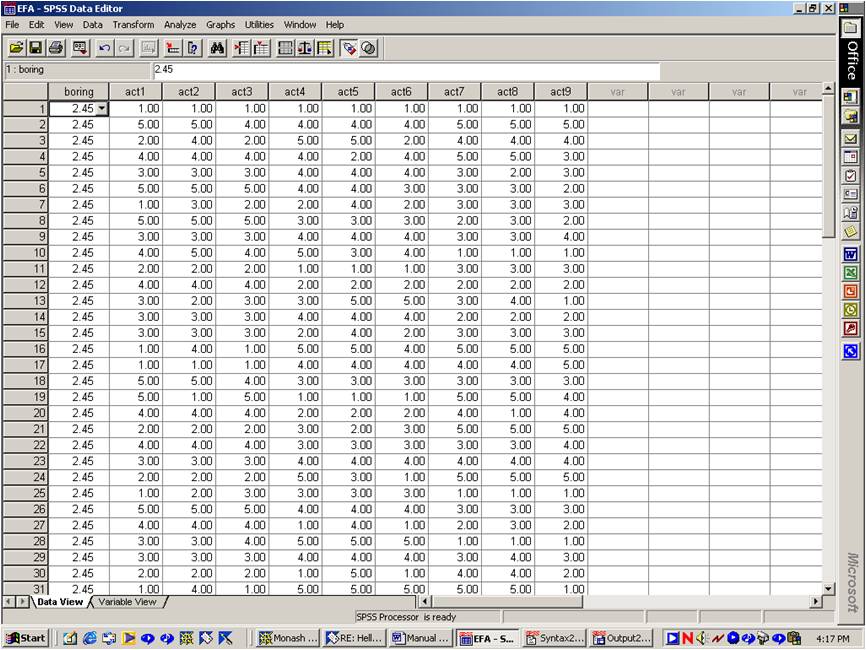 Once the number of factors has been determined, and the analysis has been repeated if necessary, the researcher should examine the table entitled "Factor matrix". This table, which is presented below, indicates the extent to which each item pertains to a particular factor or cluster of variables. Specifically, values above approximately 0.32--or below approximately -0.32--indicate the item is strongly correlated with the corresponding factor. For example, in this instance, Act 2 seems to pertain to Factor 1 and not Factor 2 or 3. When the sample size is less than 200, researchers often increase the criterion to 0.44 or even higher. 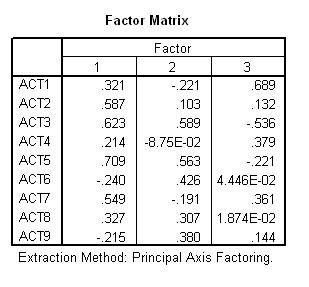 SPSS thus undertakes a procedure called rotation to circumvent this limitation. The objective of rotation is straightforward. Essentially, this procedure is designed to ensure that all the numbers in the matrix, which are usually called factor loadings, are either very low or very high to expedite interpretations. Specifically, this procedure attempts to shift the factor loadings closer to -1, 0, or 1. For example, a typical rotated matrix is presented below. In this instance: 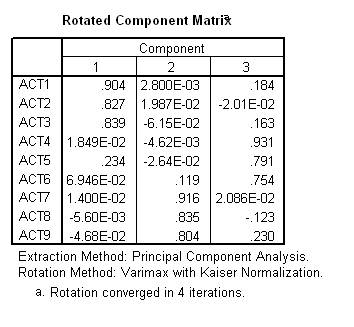 To reiterate, the previous analyses generated three factors. Most researchers undertake additional analyses to verify the items within each factor are indeed correlated sufficiently. Specifically, they examine the internal consistency of each factor in sequence, using Cronbach's alpha. To implement this procedure:

Ideally, each Cronbach's alpha should exceed 0.7. If not, some items or even factors can be rejected to raise power. If Cronbach's alpha is especially low, you might have overlooked the possibility that some, but not all, the items might be inversely related to the factor. For instance, suppose one of the acts was "refrain from playing loud music". In this instance, higher scores on this item reflect lower levels of insensitive behaviour. Accordingly, these variables must be recoded or modified. To modify these items appropriately:

This process reverses the scale and ensures that higher numbers, in this example, represent more pronounced levels of insensitive behaviour. Once the researcher has decided which items to retain, they usually average or sum the variables associated with each factor to create scales. Specifically, the researcher should: 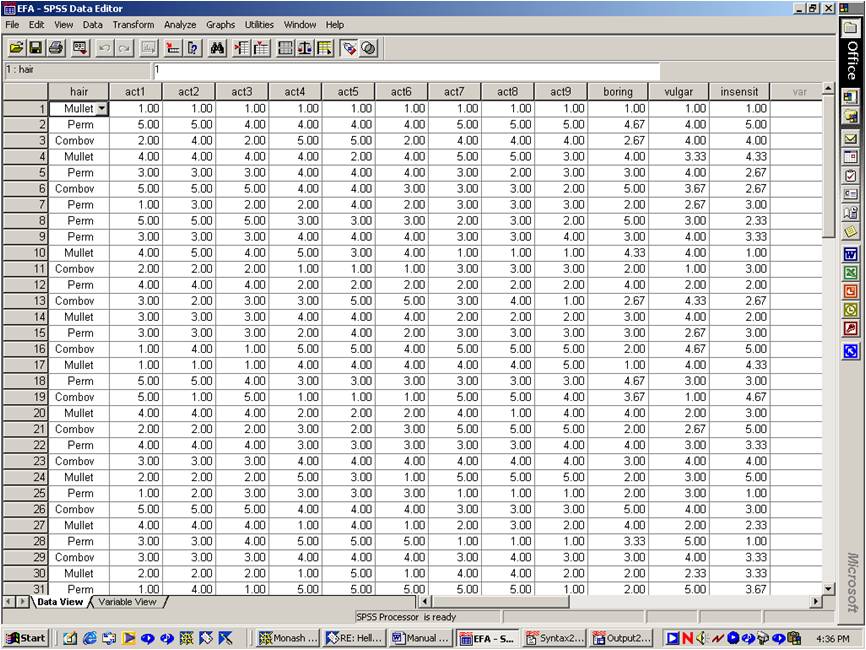 Sometimes, the output is less compelling and clear. For example, some of the items may pertain to several factors. In addition, some of the factors may be difficult to interpret. That is, the items that pertain to a particular cluster of variables may not correspond to a common theme. Hence, the substantive meaning of these factors may be unclear. In other words, the factor analysis might need to be amended and then repeated. Indeed, another property of the data might also suggest the factor analyses will need to be repeated. Specifically: 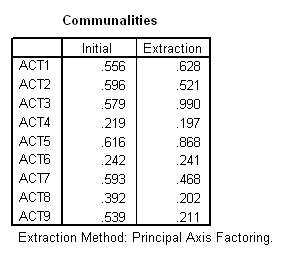 The communalities that appear in the column labelled "Initial" are less, if at all, informative. Specifically:

The bottom line is that factor analyses often need to be repeated to enhance the solution. In particular, the extraction method, rotation method, the inclusion of variables, and the number of factors can be manipulated. The rationale behind each issue is thus addressed below.

To understand extraction methods, the theory that underpins factor analysis needs to be appreciated. In particular, factor analysis assumes that individuals vary on a few fundamental traits or attributes, such as the extent to which they are boring, vulgar, insensitive, and so forth. These traits or attributes are called factors. Some hypothetical scores on these traits, together with an extract of the actual data, is provided below.

Factor analysis assumes the responses on each item are a function of values on the various traits or factors. That is, the relationship between responses on each item and scores on each factor can be represented by a series of equations. Hypothetical equations are presented below. For example, suppose an individual corresponds to a score of 3.8, 1.6, 3.7, and 4.8 for traits 1, 2, 3, and 4 respectively. These scores can be substituted in the following equations to predict their response to each item.

Factor analysis is a process that estimates the coefficients--the numbers that precede each trait or factor. Several techniques, called extraction methods, have been developed to determine these coefficients. For example, alpha factoring is intended to maximise the Cronbach's alpha associated with each factor.

Rationale that underlies the extraction methods 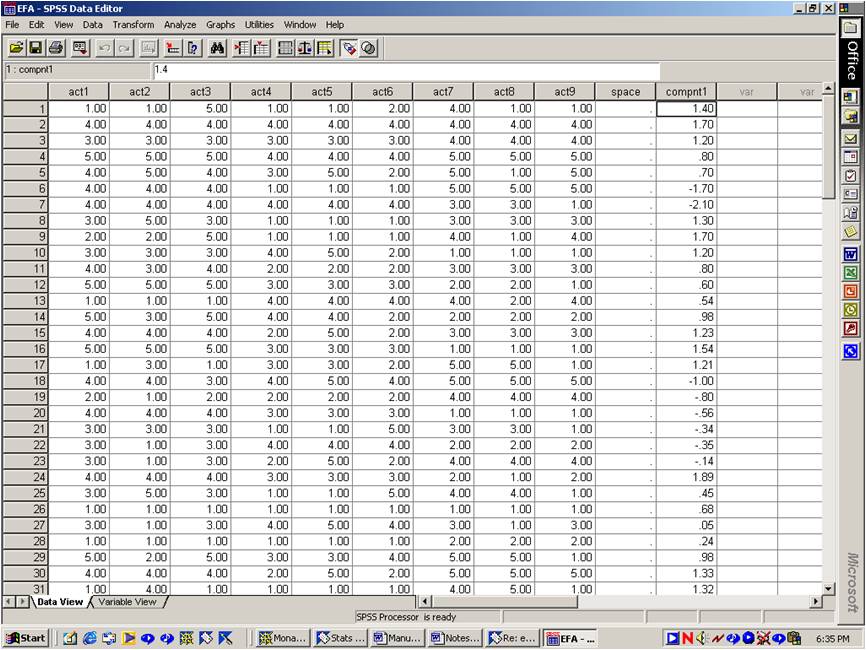 This column of numbers is intended to capture the variance in each item. To illustrate this concept, principal component computes a set of equations, such as:

In other words, principal components analysis estimates the scores on each item, using these equations. These estimated scores are illustrated in the following data file. 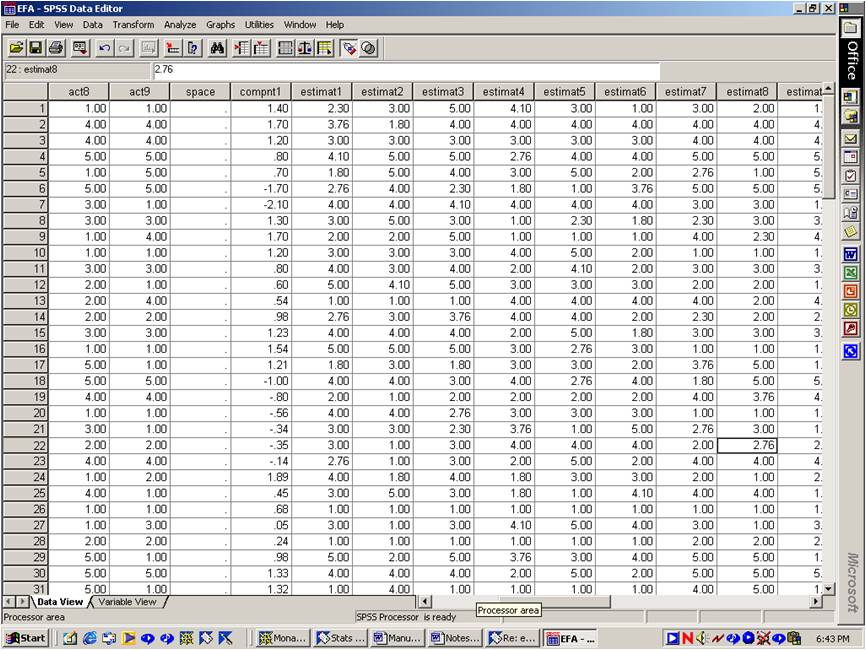 The correlation between these items is presented in the following table.

Principal axis factoring resembles this technique. However, principal axis factoring attempts to match the estimated correlation matrix with a variant of the observed correlation matrix. Specifically, the 1s in the diagonal are replaced with the initial communalities. This adjusted matrix is presented below. This adjustment incorporates some error into the equations, which is more representative of reality.

The final method that will be discussed is unweighted least squares. This method is seldom utilised, but provides an interesting insight into factor analysis. Specifically, this method attempts to minimise the residuals. Residuals represent the difference between the estimated and actual correlation matrix. The estimated matrix, sometimes called the reproduced matrix, together with the residuals are presented below.

Many researchers examine the residual matrix to determine whether or not more factors should be included. In particular:

To illustrate, suppose you could actually measure the traits or factors of each individual. These hypothetical scores are presented below. An orthogonal method would ensure these three columns of factor scores are uncorrelated. That is, high scores on one factor would not necessarily coincide with high scores on another factor. In contrast, an oblique method would not impose this restriction. 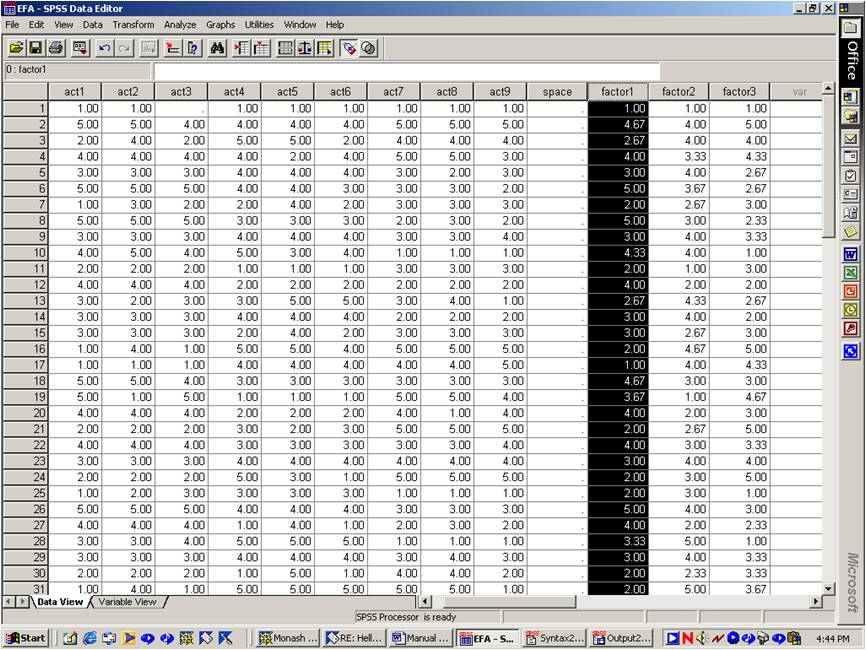 To undertake an oblique rotation with SPSS, many researchers specify the method called "Direct oblimin". The researcher must also stipulate a parameter called delta, which represents the extent to which the factors can correlate. A delta of 0 is often chosen.

Oblique methods yield two rather than one rotated matrices, called a structure and pattern matrix respectively. A structure matrix provides the correlation between each item and factor. For example, the table below suggests that Act 1 and Factor 1 yield a correlation of -0.048 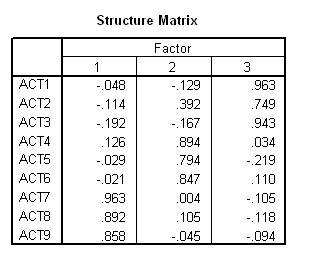 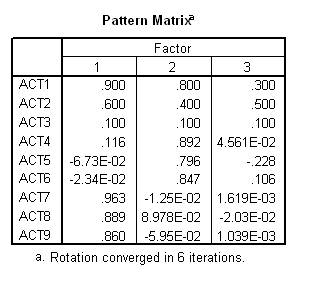 This section specifies the rationale that underpins the rotation process and can perhaps be skimmed. To appreciate rotation, consider the following factor matrix. 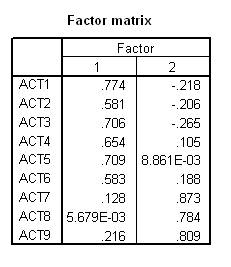 This factor matrix can be represented by the following graph. Each point represents a separate factor. For instance, Act 1 pertains to a score of 0.744 on Factor 1 and -0.218 on Factor 2. 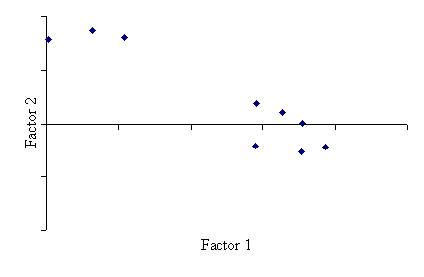 The axes can then be rotated, as illustrated below. The new values are represented by the rotated matrix. 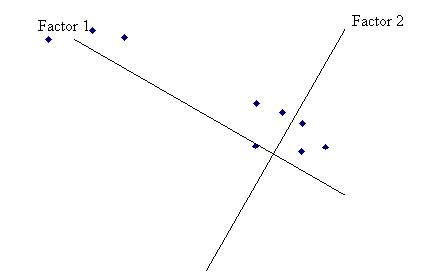 Orthogonal methods ensure these axes remain perpendicular to one another. Specifically:

Oblique methods, such as direct oblimin, do not ensure the axes remain perpendicular to one another. In particular:

Suppose the researcher has utilised several extraction and rotation methods, but the outcomes remain unclear and unconvincing. They could thus consider removing items that pertain to several factors, complicate the interpretations, or generate a low communality. In other words, the process is supposed to be iterative and subjective.

Illustration of the format used to report factor analysis.

The nine acts were subjected to principal axis factoring with a varimax rotation. Table 1 presents the rotation matrix that emerged, together with the eigenvalue, percentage of variance after rotation, and Cronbach's alpha associated with the three primary factors.


Academic Scholar?
Join our team of writers.
Write a new opinion article,
a new Psyhclopedia article review
or update a current article.
Get recognition for it.