The amygdala underpins the detection and evaluation of potential threats--that is, events that undermine the safety, status, resources, autonomy, or satisfaction of individuals--but not the regulation of inhibition of threat responses. The amygdala, anatomically part of the basal ganglia, encompass several distinct nuclei, including the centromedial nucleus, the cortical nucleus, and basolateral complex, which in turn comprises the lateral, basal, and accessory basal nuclei. 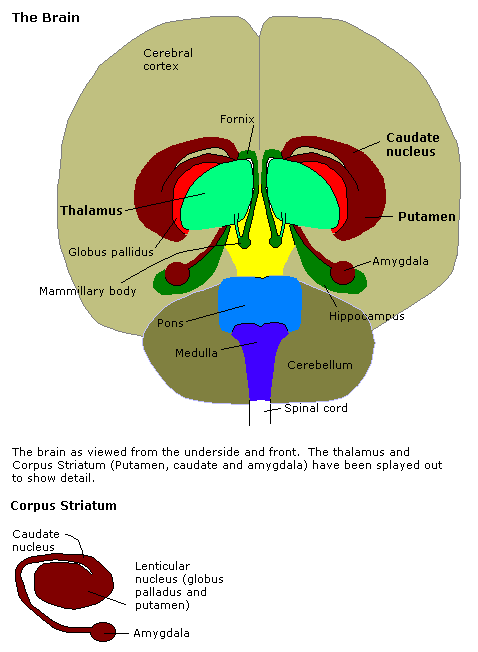 As some fascinating studies show, when individuals repeat egative words to themselves--such as coffin or death--fear or anxiety might diminish. The processing of these words activates a region, called the right ventrolateral prefrontal cortex, which inhibits the amygdala (Tabibnia, Lieberman, & Craske, 2008).

Role of the amygdala

Second, the amygdala is integral to some facets of emotional learning. That is, when the amygdala is dysfunctional, individuals do not learn to associate stimuli with fear (Critchley, Mathias, & Dolan, 2002 & Furmark, Fischer, Wik, Larsson, & Fredrikson, 1997 & LaBar, Gatenby, Gore, LeDoux, & Phelps, 1998; Morris, Ohman, & Dolan, 1998).

Specifically, information from each of the sensory systems project onto the basolateral nuclei, and the axons from this region connect to the central nucleus, which in turn projects to the hypothalamus--to affect the autonomic nervous system--and the periaqueductal gray matter--to affect behavior. Furthermore, axons from the baslateral nuclei project onto the cerebral cortex--presumably to affect subjective feelings.

Individuals experience a sense of uncertainty in many instances. Uncertainty is common in novel or unfamiliar settings, for example. In these settings, insufficient information is available to generate accurate predictions. Uncertainty tends to increase activation of the amygdala, which is typically associated with avoidance rather than approach (see Hsu, Bhatt, Adolphs, Tranel, & Camerer, 2005).

Activation of the amygdala might also increase erroneous sensitivity to hazards. In particular, after a distressing or traumatic event, such as exposure to a large spider, the amygdala increases sensitivity to related stimuli. Nevertheless, the amygdala, in essence, stores an abstracted representation of this stimulus. Hence, even a stimulus that resembles the original hazard, such as a log, is sufficient to elicit a sense of threat (for a discussion, see LeDoux, 1998).

Traditionally, researchers assumed that fear, rather than other emotions, was especially likely to activate the amygdala. Nevertheless, several arguments challenge this proposition. First, whether or not fear activates the amgdala partly depends on the methods that are used to evoke this emotion. When threatening images are presented, the amygdala tends to be activated. When other protocols are applied instead, such as memories of disturbing events, the amygdala might not be as active (Wager, Barrett, Bliss-Moreau, Lindquist, Duncan, Kober, et al., 2008). These findings imply that, perhaps, the perception of threatening stimuli, instead of merely the experience of fear, is associated with amygdala activation.

Second, as neuroimaging studies show, the amygdale is especially likely to respond to images that provoke uncertainty or ambiguity. Indeed, uncertain contexts are more likely to activate the amygdala than are stimuli that are predictable but intensely threatening (e.g., Whalen, 1998). Hence, activation of the amygdala might be evoked by unexpected, but significant, events.

Possibly consistent with this interpretation, activation of the amygdala does not correspond only to fear-or indeed only to negative emotions more generally. Processing of rewards also seems to activate this region (Murray, 2007).

Third, bilateral damage to the amygdala does not preclude the experience of fear. That is, individuals can experience negative emotions, including fear, even after the amygdalas on both sides of the brain are damaged (Anderson & Phelps, 2001, 2002).

Research indicates the amygdala is activated when individuals are exposed to topics that seem very significant--regardless of whether these issues are positive or negative. These findings coincide with the proposition that amygdala activation represents intensity, and not the valence, of emotional reactions.

To illustrate, Cunningham, Raye, and Johnson (2004) examined the brain regions that might underpin attitudes. Specifically, these authors undertook an fMRI study that was intended to ascertain the brain regions that underpin attitudes. In this study, 114 concepts were presented, such as murder, love, and abortion. For each concept, participants completed one of two tasks. They sometimes evaluated these concepts explicitly, on a scale that ranges from good to bad. Alternatively, they determined whether the concept was concrete or abstract--and thus were sometimes exposed to the item without evaluating this topic or object explicitly. In addition, fMRI was used to ascertain which regions were active during these tasks. Subsequently, participants were asked to estimate the extent to which the concept was good, bad, and intense in emotion.

Regardless of the task, the emotional intensity of concepts was correlated with activation of the left amygdala and the orbitofrontal cortex. These regions are thus sensitive to intensity, regardless of whether the concepts are evaluated explicitly, thus representing more implicit evaluations.

Correlates and causes of amygdala activation

Recent studies indicate that neuroticism might be associated with elevated levels of amygdala activation, but only in some contexts. In one study (Haas, Omura, Constable, & Canli, 2007) a series of words superimposed on faces were presented. The participants were asked to determine whether the words were positive, negative, or neutral in their emotional tone. On some trials, the emotional tone of the word was incongruent with the emotional expression of the face. Only in these trials was amygdala activation correlated with neuroticism--at least the anxiety component.

This findings indicate that perhaps individuals who exhibit neuroticism are especially sensitive to discrepancies, such as stimuli that conflict with the context (see Eisenberger, Lieberman, & Satpute, 2005). This sensitivity might evoke arousal, which also corresponds to amygdala activation (Canli, Zhao, Brewer, Gabrieli, & Cahill, 2000).

Besides elevated levels of amgydala activation, trait anxiety may also correlate with coupling of the amygdala and other cortical areas, including the prefrontal cortex (Bishop, 2007). To illustrate, if individuals carry the short allele of the serotonin transporter gene--an allele that coincides with trait anxiety--the feedback circuit that connects the amygdala and cingulate cortex is compromised. When this circuit is compromised, negative objects do not habituate as rapidly as usual (Pezawas et al., 2005). Furthermore, if individuals report elevated levels of anxiety, the prefrontal cortex does not tend to regulate the reactivity of the amygdala as effectively as usual (Hofmann, 2008).

Consistent with the purported relationship between amygdala activation and trait anxiety, functioning of the hypothalamus-pituitary-adrenal axis is also modulated by the amygdala. For example, glucocorticoids such as cortisol increase activity in the basolateral amygdala. This activity in the amygdala then increases the production of corticotropin-releasing-factor from the central nucleus of the amygdala, culminating in the release of ACTH from the pituitary and thus cortisol from the adrenal glands (for evidence and discussion, see Duvarci & Pare, 2007; Merali et al., 2008; Rohleder et al., 2003). Increases in cortisol are experienced as a sense of threat.

Elevated levels of cortisol--a hormone that is released by the adrenal glands under stress--has been shown to increase the size or volume of the amygdala. In particular, cortisol stimulates growth of the dentrites in neurons within the pyramidal and stellate basolateral amygdala (Fuchs et al., 2006). Synaptic connectivity of the amygdala thus increases (Vyas, A. et al., 2006). Furthermore, in humans, stress management training has been shown to diminish grey matter density in the right basolateral amygdala (Holzel et al., 2010), consistent with the proposition that decreases in cortisol reduce dentritic growth in the amygdala.

In one study, participants completed a measure of impulsivity. Questions examined whether individuals tend to act without deliberation, reach decisions quickly, and fail to plan carefully. Next, they completed a task in which an angry and fearful face appeared alongside one another. Participants had to select one of these two faces, depending on whether another face, which appeared above this pair, was also angry or fearful. In addition, participants completed a similar task, but with abstract patterns instead of actual faces. As fMRI imaging showed, when the stimuli were negative faces rather than neutral patterns, activation of the amygdala increased.

Conceivably, the dorsal amygdala may also be activated in concert with the ventrolateral prefrontal cortex, which elicits more suitable and responsible behavior. This region of the amygdala may, therefore, evoke rapid responses that nevertheless accommodate broader considerations. These responses are adaptive and may not seem impulsive. In contrast, the ventral amygdala may evoke responses to stimuli that do not integrate information from prefrontal regions.

Associations with other regions

The amygdala and the hypothalamas

The amygdala and the ventrolateral prefrontal cortex

Tabibnia, Lieberman, and Craske (2008) showed that conditions that activate the right ventrolateral prefrontal cortex--that is, the exposure of distressing pictures coupled with emotional words--reduced autonomic reactivity. For example, when the same distressing pictures were presented on 10 or so occasions, the skin conductance of participants diminished over time, especially when coupled with an emotional word.

Accordingly, conditions that activate the right ventrolateral prefrontal cortex also reduce the emotional intensity of events. Indeed, this region might have evolved to enable individuals to reflect upon emotional issues objectively and systematically, without the distractions of intense feelings (Tabibnia, Lieberman, & Craske, 2008).

Nevertheless, some evidence indicates that individuals can override this tendency. That is, a conscious effort to orient attention towards another object can nullify this bias towards emotional stimuli. Specifically, when individuals attempt to direct their attention to some object, amygdala activation in response to fearful expressions is curbed ( e.g., Bishop, Jenkins, & Lawrence 2007). These findings indicate the conscious goals can temper the amygdala reaction to emotional stimuli.

A variety of other studies, however, challenge this assumption. That is, some research indicates that amgydala activation does not diminish, and might even increase, when attention is directed to other objects (e.g., Williams, McGlone, Abbott, & Mattingley, 2005). Furthermore, when attention is distracted by other tasks, the amygdala often responds to a broader range of emotional cues, although activation of the insular cortex diminishes (Anderson, Christoff, Panitz, De Rosa, & Gabrieli, 2003).

Anderson, A. K., & Phelps, E. A. (2002). Is the human amygdala critical for the subjective experience of emotion? Evidence of intact dispositional affect in patients with amygdale lesions. Journal of Cognitive Neuroscience, 14, 709-720.

Bertolino, A. et al. (2005). Variation of human amygdala response during threatening stimuli as a function of 5-HTTLPR genotype and personality style, Biological Psychiatry, 57, 1517-1525.

Merali, Z. et al. (2008). Effects of corticosterone on corticotrophin-releasing hormone and gastrin-releasing peptide release in response to an aversive stimulus in two regions of the forebrain (central nucleus of the amygdala and prefrontal cortex). European Journal of Neuroscience, 28, 165-172.

Rempel-Clower, N. L., & Barbas, H. (1998). Topographic organization of connections between the hypothalamus and prefrontal cortex in the rhesus monkey. Journal of Comparative Neurology, 398, 393-419.


Academic Scholar?
Join our team of writers.
Write a new opinion article,
a new Psyhclopedia article review
or update a current article.
Get recognition for it.